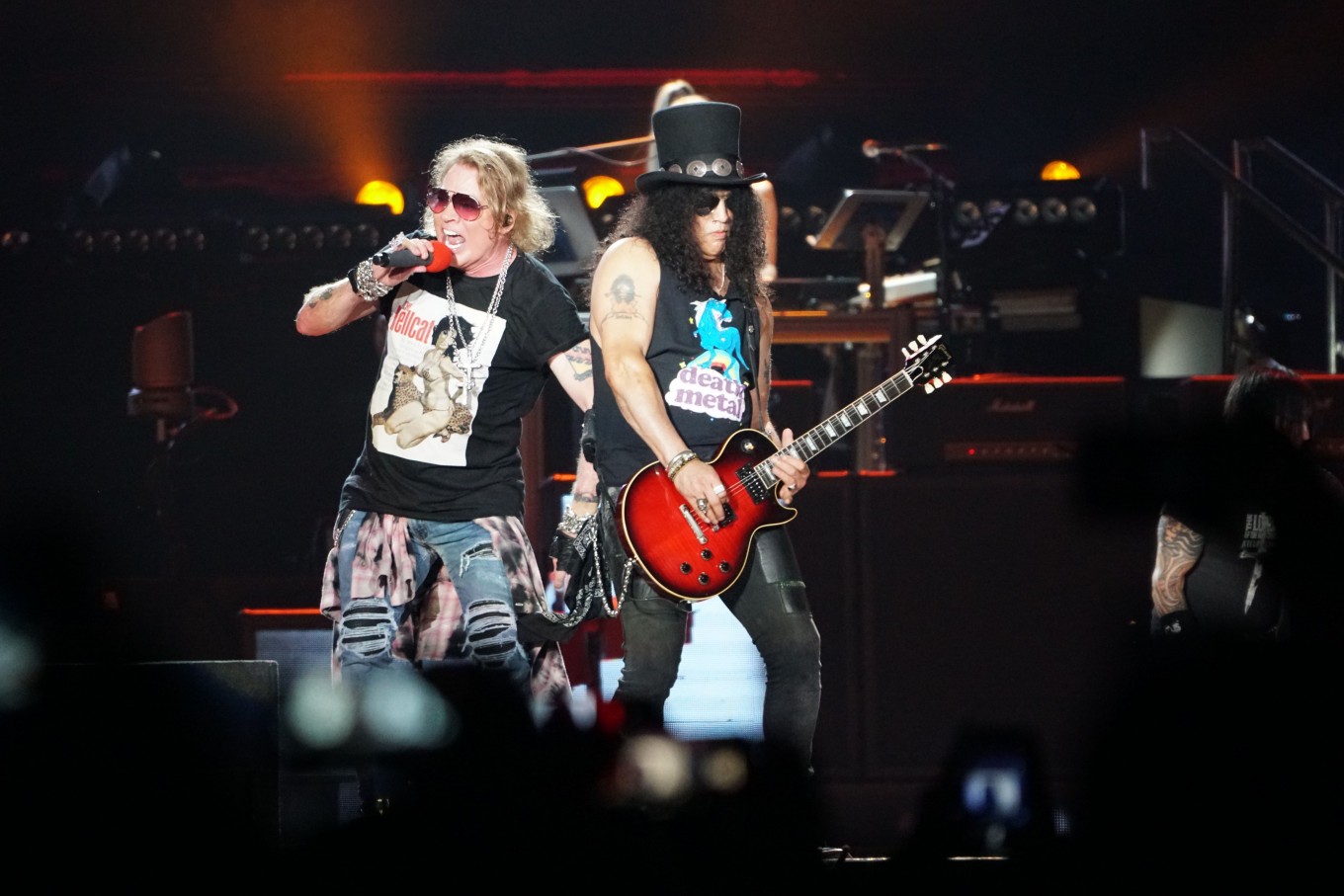 Thursday, November 8th 2018, will always be known as the day Guns N’ Roses reunite Axl Rose and Slash and brought the biggest rock concert Gelora Bung Karno Stadium and Jakarta have ever seen with their “Not in this Lifetime” tour. Being the first stop of their Asia tour and with approximately 40 tons of equipment, we were promised a magnificent show and they truly delivered!

It was a gloomy Thursday night when we made our way to GBK only to find it was filled with black t-shirt, red headband wearing crowds, but that meant we were at the right place. The atmosphere of GBK totally changed 180 degrees since the last time we saw it. From being filled with sport enthusiast for Asian Games to being the Mecca of all Guns N’ Roses fans from all over the country. The red and white seats of the stadium and the grass was covered by a mass of Guns N’ Roses fans.

When the clock stroke 8, the light dimmed and a tank filled with wild zombies suddenly appeared, motioning that the show was about to start. We thought the zombies filled tank was just a quick intro, but it turned out to be a 20ish minute repetitive and animated opening act. But eventually the zombies got blown up and the real treat started!

Axl Rose, Slash and the rest of Guns N’ Roses took the stage and start the show with “It’s so Easy” out of their “Appetite for Destruction” record. The thundering opening number reward them with an equally monstrous cheers. GNR continued the show with some of their hits such as “Welcome to the Jungle” and “Rocket Queen” before taking their spin of Wing’s hit “Live and Let Die”. In fact, that was not the only cover they brought. They also took their spin on Misfit’s “Attitude”, Pink Floyd’s “Wish You were Here” and Soundgarden’s “Black Hole Sun”.

The 3 hour show didn’t lack of energy from the beginning to end! Between Axl Rose high pitched voice and energetic stage performa, to Slash’s killing guitar solo and quite persona, the show was entertaining back to back. What’s even more entertaining was Axl Rose’s many outfit changes. Everytime he gave the stage to Slash for a smashing guitar solo, he always came back with a different shirt and hat. He even took out his iconic plaid shirt for a spin.

By 11 o’clock everyone was well invested in to the show. But when Slash hit the first note to the ICONIC “Sweet Child O’ Mine” riff, everyone officially lost it. It was such a classic song, beloved by everyone, hard fans or not. The show went on with another classic, “November Rain”. Such an appropriate song to be played on a rainy November in Jakarta. This song magically scare away the dark cloud that have been hanging out for far too long above the stadium.

The legendary band from the USA closed their first set with a cover of Bob Dylan’s “Knockin’ on Heaven’s Door” and “Nightrain”. They came back for their final four songs including The Who’s “The Seeker” and close the whole show with “Paradise City”. People cheered and confetti exploded as we bid adieu to our hero.

Guns N’ Roses’ comeback was more that we expected. They put up a thundering and earth-shattering show for everyone who’s been longing for an Axl Rose and Slash reunion. Seeing all of Guns N’ Roses fans coming in from all over the country to this one stadium and just sing their hearts out, was heart warming and seeing how Guns N’ Roses’ songs still live on until now is such an experience on its own.

Thanks to UnUsUaL Entertainment and TEM for bringing this reunion to Jakarta!

Previous: Set Your Date on February 2019, Because LaLaLa Festival Returns!
Next: Franz Ferdinand Comes Back To Rock Jakarta And Bali On Their Indonesia Tour 2018