Bali! Are You Ready for #Bestival Arrival?

The UK’s multi-award winning festival, Bestival, is setting sail for a new adventure in Bali on 30th September and 1st October 2017.

On a mission to spread its very own peace and love to Asia for the first time, Bestival will be bringing its trademark unique, creative vision from the UK to the paradise island of Bali, Indonesia. Expect one of the most colourful shows Bali has ever seen.

Taking place at the incredible, mind-blowing venue, Uluwatu’s Garuda Wisnu Kencana (GWK Cultural Park), Bestival will entertain the audience with eclectic music from around the globe as well as offering immersive experiences, delicious food and unforgettable shenanigans – in a way that only Bestival can.

Bestival curator Rob da Bank says: “Well I can’t think of a better place in the world to do a new festival than Bali – a beautiful country, incredible culture, great music and don’t even get me started on the surf, history, nature and people… We are honoured to be bringing Bestival to Bali and promise to deliver a sublime festival experience reflecting being on the Island Of Gods from funk pioneer George Clinton and hip hop royalty De La Soul to indie heroes alt-J and Purity Ring it’s gonna be the best!”

Bestival UK has been at the forefront of the British festival scene for the past 14 years, winning a multitude of awards. The original boutique festival attracts over 40,000 fans each year and is known for its creative vision and eclectic music.

‘Feel the Love’ as the Rudimental take the main stage helm. The drum and bass band, who previously collaborated with pop royalty including Ella Eyre, Ed Sheeran and Emeli Sande, to name a few, will be on-hand to deliver one of their high-energy DJ sets. D.A.I.S.Y Age legends, De La Soul, will be gracing the stage with some of their classic back catalogue. After releasing a phenomenal 17 albums, the hip-hop trio will celebrate 30 years of De La Soul this year. Not to be missed! We are also incredibly honoured to have the Granddaddy of funk and acid rock, Parliament-Funkadelic main man, George Clinton join us. Bestival curator and musical wizard, Rob da Bank will be on the decks, plus some incredible pop from local act, Stars and Rabbits.

Providing the backdrop to the first ever show in Southeast Asia, is the stunning Garuda Wisnu Kencana. With breath-taking vistas across the tropical landscape of Bali, and with over 240 acres of parkland centred around 25m high limestone-carved cliffs, this beautiful venue will host some of the biggest international and local talent over two days. 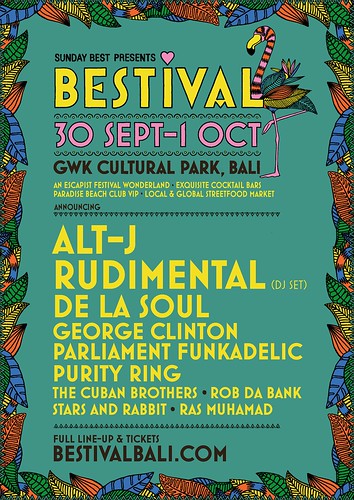