Lucas Nathan, an American songwriter and producer has been producing electronic music since 2009. His first project was called Zonotope and a noise music project Diane Kensington Devotional band. Now, his most notable alias Jerry Paper was made in 2012.

With his style in music and his eccentric onstage performance, he has gained much attention over the past couple of years. Raising notoriety with his constant flow of work and many collaborators. Jerry Paper also has toured alongside Mac Demarco, Badbadnotgood, and Mild High Club in the past years. He also collaborated with Tyler The Creator for The Grinch Soundtrack which was released in November 2018.

Jerry Paperâ€™s latest release, Like a Baby (co-produced by Jerry (aka Lucas Nathan) and Matty Tavares of BadBadNotGood) is his first album for Stones Throw. Like a Baby got itself some guest backing vocals and instrumentation from Weyes Blood, Charlotte Day Wilson, and Mild High Club’s Alex Brettin. The songs in the album are funky, easy going, with Lucasâ€™s vocals which can make us listeners swoon.

Nathan sings on the track, “Iâ€™m here dressed up like a cartoon/asking please please burn your cocoonâ€. And he adds, “On stage and in recordings I embody an exaggerated version of my ‘self,’ pushing it to a limit where I transcend my ego, in an effort to get the audience to shed their ideas of themselves, shed their egos, and be free. Jerry Paper is me at my freest, an ego sacrifice in an attempt to get people to do the same.â€

Now, collaborating with the aforementioned label, Stones Throw and noisewhore are working together to bring Jerry Paper to Jakarta for the first time ever. The collaborative effort was announced a week ago and has been teased beforehand. This run of tour in Asia only features a few dates, making this Indonesian show all the more special.

Having said that, Jerry Paper is ready to perform their first ever live performance in Jakarta, Indonesia. The band will perform in Rossi Musik Fatmawati. The show will be held on June 19 2019.

Asked about the prospect of organizing a show for Jerry Paper along with Stones Throw, Argia of noisewhore said:

â€œIt certainly is something special. Weâ€™ve been focusing on bringing smaller acts and innovate through our curation of artists. Bringing the legendary label Stones Throw and Jerry Paper for our second show of the year surely means everything to us. Itâ€™s a sign that weâ€™re working the way we want it to be and will continue to do so for the rest of the year. We are surely excited of whatâ€™s to come for this show and beyond.â€

Tickets are currently available at a normal price at 350k. Tickets also can be bought through noisewhore (noisewhore.com/shows/) The poster for the show is also attached in this email 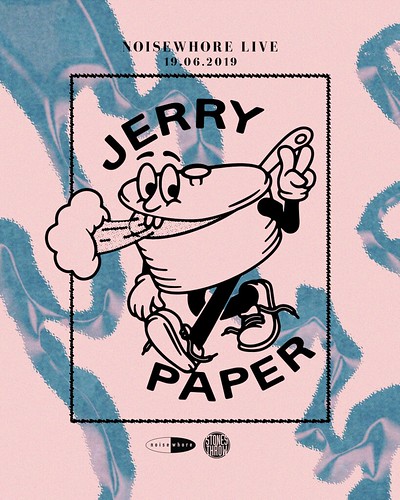 Previous: The Time Machine Festival Returns!
Next: The Cure, Sia, and Many More for Fuji Rock Festival 2019