Lay Down Your Books, You’re Going to See Clean Bandit! 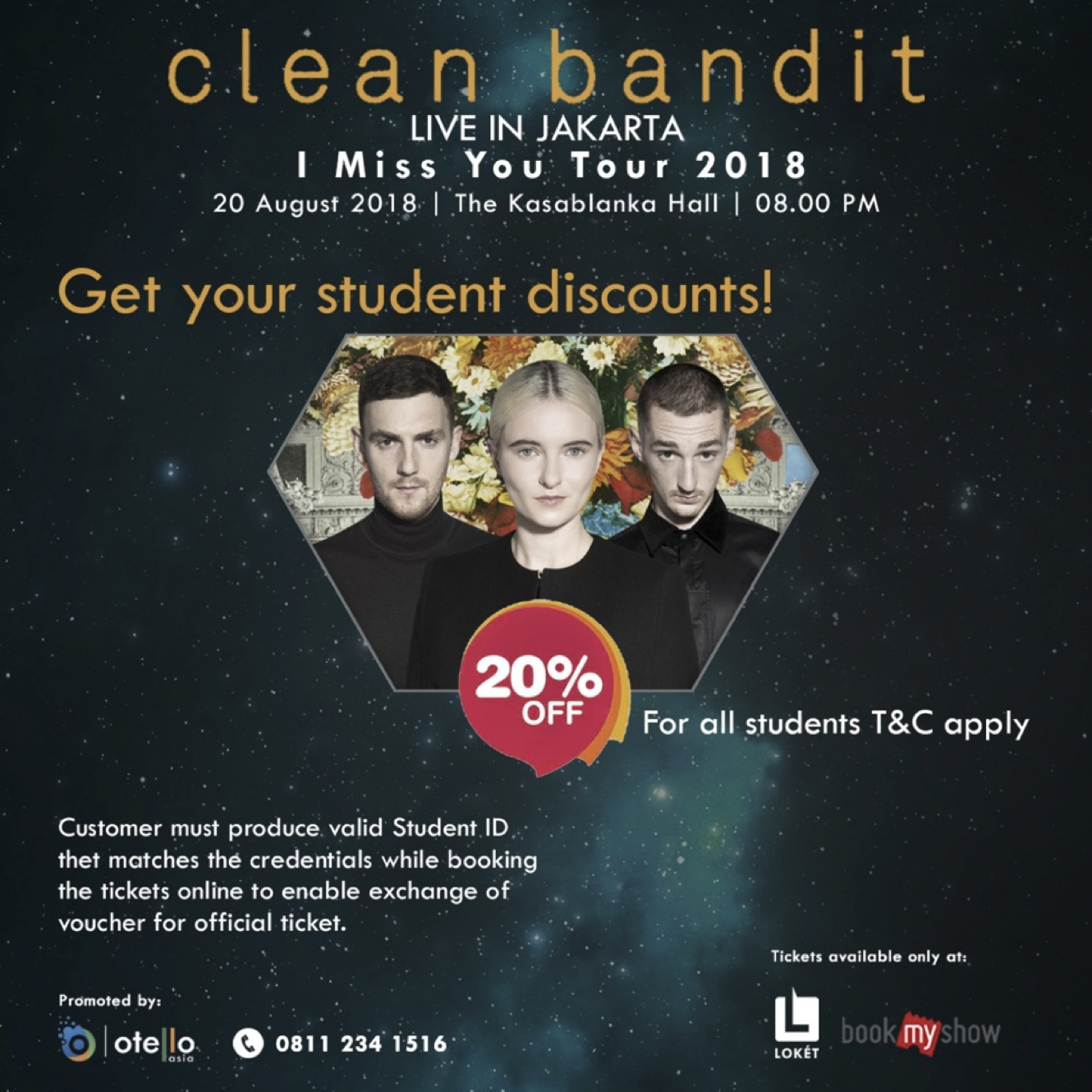 Clean Bandit will be present to you a concert entitled â€œClean Bandit Live in Jakarta – I Miss You Tour 2018â€ on Monday 20 August 2018 at The Kasablanka Hall – Mall Kota Kasablanka Jakarta at 8 PM.

â€œWe, Otello Asia, want to present this students discount for 20% specifically for the Festival Silver tickets with these terms and conditions, you have to bring your student ID, if you canâ€™t show your student ID, then youâ€™ll be charge with the normal price without discount, for students wanting to watch Clean Bandit on 20 August 2018 can get their tickets online from today at www.otelloasia.comÂ  id.bookmyshow.com/cleanbanditjkt and neo.loket.com/widget/cleanbandit. So what are you waiting forâ€¦ to all students.. get your!â€ Said Syasan Ibrahim, CEO of Otello Asia.

Clean Bandit consists of Grace Chatto on cello and vocal accompanied by the Pattersons brothers, Jack on bass, keyboard , piano, and Luke on drum and percussions. The formerly four piece band got together during their university years in 2008 until 2012.

The electronic music group got their big break after their single â€œ Rather Beâ€ featuring Jess Glynee successfully break through the Billboard Hot 100 Singles in number 10 and received a Grammy Award for â€œBest Dance Recordingâ€. They donâ€™t only have Grammy on their bag, their other hits such as â€˜Rockabyeâ€™ featuring Anne Marie and Sean Paul was nominated as the Top Dance/ Electronic artist/Electronic song from notable music awards such as Brit Awards, MTV Europe Music Awards dan Teen Choice Awards. â€˜Symphonyâ€™, one of their current hits which featured the Swedish singer, Zara Larsson, was a worldwide hit, as well as their single featuring Julia Michaels and tour title, â€œI Miss Youâ€. We also might be lucky enough to listen to their new single with Demi Lovato called â€˜Soloâ€™ during this tour.

Ticket prices for Clean Bandit Live in Jakarta â€“ I Miss You Tour 2018:

Previous: Say Hi to KYGO, Jakarta!
Next: Another One from Noise Whore : Unknown Mortal Orchestra Live in Jakarta!