Twelve foreign and Indonesian musicians today were added to the We The Fest 2019 lineup which had previously announced various musicians across genres including Rae Sremmurd, Daniel Caesar, Sabrina Claudio, DEAN, Tulus, and After Sex Cigarettes.

In the second phase of the 2019 We The Fest lineup, 6 new names were announced, namely Australian singer Troye Sivan who was asked to become the headliner or main performer; singer of the songs “2002″ and “Friends”, Anne-Marie; Awarded Best R & B song nominee at the 2016 Grammy Awards, Cashmere Cat; singer, producer and rapper from 88rising label Joji; New York producer, Jai Wolf; and Cade, a singer and electronic producer from the United States.

“In the phase of the two We The Fest 2019 lineups, finally one of the musicians most often asked to bring in for years can be brought this year, Troye Sivan,” said Sarah Deshita, Brand Manager of Ismaya Live as the organizer.

“In addition to Troye, 11 international and Indonesian musicians represent a diversity of genres on We The Fest which are important elements at this festival. One thing that should be anticipated is the surprises of Indonesian musicians who often bring something different and special if they perform at We The Fest, “continued Sarah.

In addition to the announcement of 12 new names in the lineup, We The Fest also announced the return of 5 We The Fest distinctive zones included in the Beyond The Music series including silent cinema WTF Cinema Club; games area with various games, Carnifun; food and beverage zone that serves food and drinks from Ismaya Group’s favorite restaurant concept, Eats & Beats; the hall where viewers can try out various interactive activations and areas that showcase the collaboration of We The Fest with Indonesia’s famous clothing brand, WTF Con; and a zone where viewers can take art classes and see a variety of works of art from Indonesian artists, Art Village.

“We The Fest is a festival full of collaboration. Under the umbrella of Beyond The Music, we will collaborate with various communities, brands, institutions, media and organizations to create an unforgettable festival experience, “Sarah said.

“There are still many musicians from outside and inside the country, as well as activations and campaigns that we will announce in the next few months,” continued Sarah.

Meanwhile, there is also an installment program for GA 3-Day Pass tickets at a price of Rp1,500,000, which is paid in installments through 3 payments with a choice of payment frequency every 15 days or 30 days.

For a more complete festival experience, there is a Very Important Banana (VIB) 3-Day Pass ticket for Rp2,800,000 which provides more convenience starting from the VIB special entrance, access to the VIB special audience area in front of the stage, special queues when exchanging tickets, access to VIB lounge, VIB toilet and VIB bar. 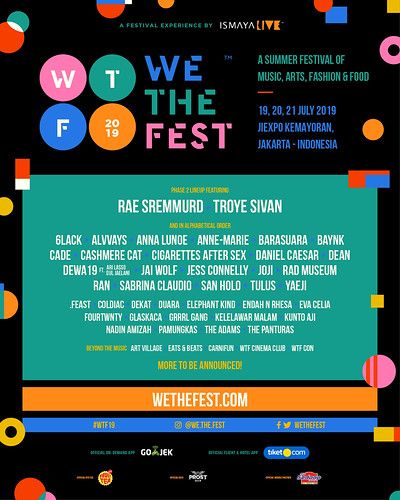 TOPICS we the fest

Previous: We The Fest 2019 : SUBMIT YOUR MUSIC!
Next: The Time Machine Festival Returns!