Jay Sean for Your Upcoming TGIF! 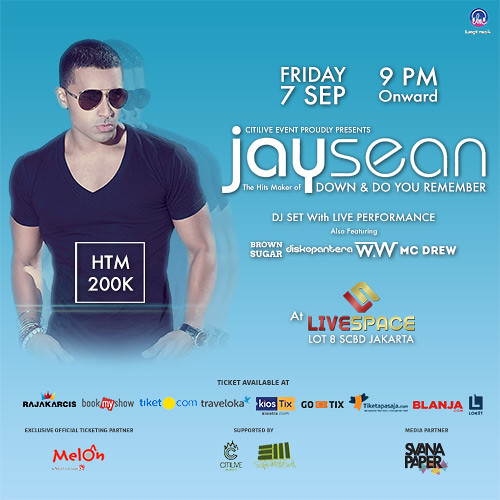 Jay Sean is famous and often singing with famous players such as Lil Wayne, Lil Jon, Nicky Minaj, Sean Paul, Pitbull and many more, right now he continues to work for his music, after success by winning Platinum Records for the single ‘Do You Remember’ , ‘Down’, ‘I’m All Yours’, this British singer has been in the music world for more than 15 years, beginning his career from Rapper Underground to Popular being Mainstream makers of several labels such as Virgin Records, Cash Records to had solo career as an Independent Artist and until now Jay Sean was under the Sony Music label. Jay Sean became the only solo singer from Southeast Asian descent and Urban UK Singer who managed to compose the Billboard Hot 100 Charts world song.

The price of a ticket to watch Jay Sean’s performance can be purchased at a price of Rp. 200,000.- (HTM Two hundred thousand rupiahs only). Tickets can be purchased online through Rajakarcis.com, Book My Show, Tiket.com, traveloka, Kiostix, Go-Tix, Tiketapasaja.com, Blanja.com and Loket.com

Previous: Join Us on The Most Marvelous Journey Through the Soul , Senses and Mind Together with World –Class Invaders!
Next: Shooketh to The Coreth : Synchronize Fest!