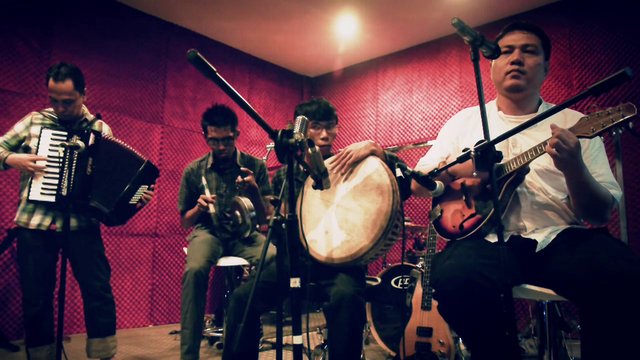 Music scene in Indonesia always has something to offer. If you get bored with the same tunes that people play over and over, you just have to dig in a little deeper to find what kind of tunes that you want. Let’s meet SEMAKBELUKAR, a Palembang-based band. While most of the current bands are influenced from western life style and being a cool-ass, in contrary, SEMAKBELUKAR are doing something different on their own. SEMAKBELUKAR elevates the level of ‘melayu’ tunes. However, theirs won’t be like those ‘melayu’ bands that you always see on Tv. SEMAKBELUKAR also completes their music with lyrics that have a wiseful meaning and most of their songs are inspired by Moslem’s Koran.

It’s David Hersya, vocalist and frontman who leads Belukaria Orkestar. After releasing two mini albums in 2009, ‘Semoga Kita Mati Dalam Iman‘ dan ‘Mekar Mewangi‘, and followed by their EP, ‘Drohaka‘, in 2012. Now, they have returned with their latest single, entitled ‘Berlayar di Daratan‘ from their latest EP that will be released on October 22nd. With a one of a kind vocal, a flawless percussion, and a beautiful sound of accordion, SEMAKBELUKAR are ready to take the spotlight of Indonesian music scene.

Previous: The Next Big Thing (No.35) : Disclosure
Next: Ohdio.fm : The New Dynamic Way to Enjoy Music