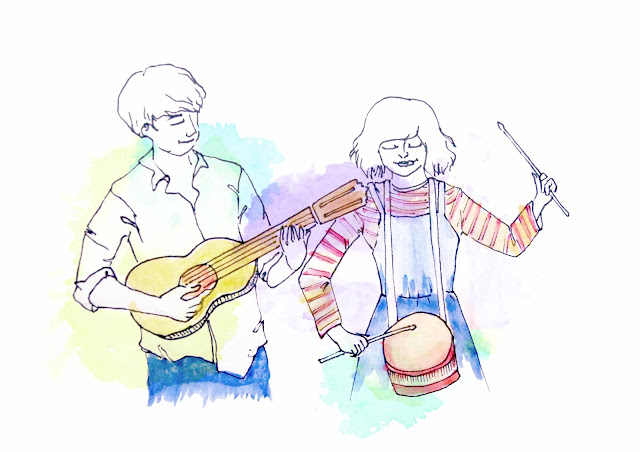 Do you remeber the sound of our childhood dream? Sound that reminds us of home, the place where we can hold our parents’ hands and feel safe from the nasty world or the sound that always accompy our little adventure? Yes the feeling when you hear of Lullatone‘s music. As I wonder about the band, I was lucky enough to ask Shawn about their music and Lullatone future.

Tell us a brief short version of how you end up with Lullatone?
Lullatone started when I fist moved to Japan. Yoshimi and I were living in a tiny apartment in Osaka, and every night when she went to sleep I would stay up and record quiet music.
I tried to make lullabies for her using simple sine tones, so that is how we came to the name Lullatone.

What do you want to tell people about your music?
We hope our melodies capture the magic of everyday normal life stuff like, grocery shopping and walking on sidewalks and leaves falling into your hair. On your Soundtracks for Everyday Adventures we felt like you try to describe life in more mature way, like older version of Lullatone, its like your music has been growing. are you trying to make soundtrack album for your kid?
Thank you. That was the first album we released as 30 year olds, so I think that we grew up a lot.
We weren’t really trying to make soundtracks for just our kid, we hoped to make the album simple enough that everyone could relate to it in their own way…
kind of like how the horoscopes in the newspaper are so vague that no matter what it says, it kind of feels like it was written just for you.

You use stop motion on “growing up” music video? where does the idea comes from?
We really like stop motion! We have been working with it for about 10 years. Actually, we have a new short stop motion video on the local TV station here every week (but I can’t show them online until the current season ends)

Do you play all the instrument by yourself?
Mainly, yes. But sometimes our friend Yoshihiro Tsuchie plays guitar for us.
He has really long fingers and a double jointed thumb, so the way he strums guitar is super special.

You have achieved quite a lot as a musician, like making film scoring, ad soundtracks, have a happy family (i mean you featured as one of the cool dad!) is there anything you want to achieve in the future?
Really, we just want to live on the beach and swim all day every day!

What is your ultimate all time album that you never get bored of when someone play it over and over again?
The Zombies – Odessey and Oracle

Is there any artist you want to collaborate with to expand your music? or you just want to stick with Lullatone tunes?
Mainly we are happy just sticking with Lullatone, but I can’t deny that I would love to do something with David Byrne or Brian Eno

Any tour plan? or if you can choose where do you want to perform, where would it be?
We actually stopped playing shows 2 years ago. Now we just play music in our living room for our 4 year old son, and I couldn’t imagine a better venue in the world : )

So guys, do you remember your childhood adventure soundtrack sounds like?