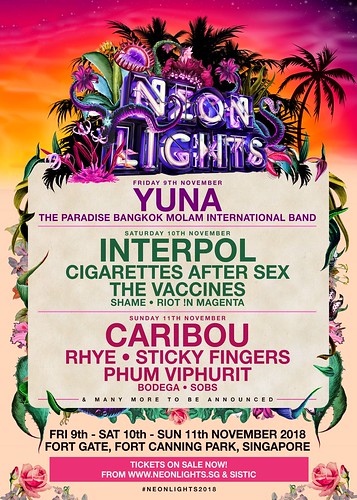 Neon Lights returns for its third edition at Fort Gate, Fort Canning Park from 9 to 11 November 2018 and the scene is set for three sensational days of immersive arts activities and experiences, and a stellar music line-up. Festivalgoers can look forward to a slew of arts programmes, workshops, live art and projections from internationally renowned artistes, including Justin Shoulder’s ‘Fantastic Creatures’ and Berlin Short Film Festival award nominee Empyreal’s mesmerising ‘Liquid Galaxies’. Exciting new homegrown musical acts are joining the festival line-up, including Mediocre Haircut Crew, FAUXE and Perk Pietrek, with additional international acts set to be announced soon. These incredible experiences are poised to complement musical performances by previously announced festival heavyweights like YUNA, Caribou and Interpol.  Early bird tickets to Neon Lights 2018 are selling out fast, and can be purchased on www.neonlights.sg and SISTIC.

May Leong, Neon Lights Director of Partnership and Arts shared, “Neon Lights is a unique proposition in Singapore’s culture landscape, being a holistic celebration of arts and entertainment with a stellar  music line-up at its core. We’re thrilled to have partnered with some of Singapore’s most exciting local collectives and programme partners to bring together a diverse community of artists, musicians and culture pushers to add depth to the festival experience!”

Festival revelers can discover and hone their creative vibes through three distinct and eclectic programme areas at this year’s Neon Lights – Easy Street, Neon Fun and Neon Nooks. Deep beats permeate the Easy Street stage from Friday to Sunday. Co-programmed by Sideshow, festivalgoers will be treated to performances by some of the most sought-after local producers and musicians from a wide range of musical persuasions, including house, disco, hip-hop and and jazz.

Local hip-hop collective and rap fiends Mediocre Haircut Crew take to the stage on Friday with their honest lyrics and eccentric genre-bending rhythms, followed by a vibrant set by Scottish beatmaker DJ Shellsuit, a global party-rocker whose music has moved crowds around the world. Shellsuit will be joined by Singapore-based musician and winning percussionist Ridz.

Dubbed ‘Singapore’s Hottest Producer’ by European label Top Billin, Perk Pietrek will set the tune on Saturday. The underground electronic dance tastemaker will be joined by one of Singapore’s most prolific producers, FAUXE, fresh off his new album Ikhlas and ready to drop some highly-anticipated South-East Asian inspired beats. For those itching to have a go at the turntable, established DJ school E-TracX will be running a skratch workshop. To close out the night, the renowned DJ Ulysses, who draws from a wide repertoire of genre-bending styles and has been featured in Gilles Peterson Worldwide Music Festival, is set to bring down the house with a TUFF CLUB Takeover.

Attendees can groove to the jazz funk rhythms of The Jazz Djogets on Sunday, while Read Bridge Dulcimer take the world music showcase up a notch with a mixture of Appalachian old-time American and Irish mountain tunes. DJ Shellsuit returns for an electrifying festival encore to cap off the Easy Street performances.

Illuminating the nooks and crannies of the festival, Neon Nooks will bring Fort Gate to life with spectacular roving acts, live art performances and projection mapping. Be intrigued by Asia Pacific Brewery Foundation Signature Art Prize finalist, Australian performance artist Justin Shoulder’s ‘Fanstastic Creatures’ while Berlin Short Film Festival award nominee Empyreal will bring her mesmerising light projection to the festival – an experiment in light and colour using organic liquids and filmed through a lens –which will transport visitors to an alternate galaxy.

Witness the Glitter Queen transform into an extraordinary sparkly PINK icon with her durational performance or shake things up with a rousing Samba display by Saodaçåo Capoeira Singapore. While moving between programmes and activities, fans should keep their ears peeled for roving bohemian band The Lost Hat.

There’s oodles of fun and play for the whole family at Neon Fun over the weekend, which presents an array of imaginative workshops and games for the young and young at heart to dabble in. STPI-Creative Workshop and Gallery’s two workshop stations with screen printing and marbling techniques will resonate with creative souls, along with Casey Chen’s unique sessions on wearable woodart where participants can take home their own creations. Pop in for Frankie Malachi’s amazing Puppet Exposé which showcases fascinating puppetry creations and shares the magic behind them, or to dance to DJ Itch’s all-vinyl Asian-inspired sets. Those looking to spruce up their festival getup should head straight to the It Takes Balls workshop for eclectic DIY finger bracelets, before getting active with Sideshow’s various DIY Garden Games.

Poised to open the festival with her lithe vocals and chart-topping beats will be Malaysian-born R&B superstar YUNA, all the way from Los Angeles. She’ll be sharing the stage with Thailand’s world music  sensation The Paradise Bangkok Molam International Band.

Bringing their dynamic stage presence to South East Asia for the first time ever, the iconic Interpol is set to stun with their show-stopping hits spanning Turn On The Bright Lights to this year’s new album Marauders. Ethereal dream-pop maestros Cigarettes After Sex from Texas take to the stage next with their highly-coveted ambient-pop melodies, followed by The Vaccines, ready to show Singapore the sound of a defining British rock and roll band. Post-punk provocateurs Shame are slated to amp up the crowd next, with Riot !n Magenta rounding off the night as they indoctrinate listeners to their brand of edgy soul.

Previous: An Intimate Hour with Unknown Mortal Orchestra
Next: Neon Lights : Geared Up Your Lights!