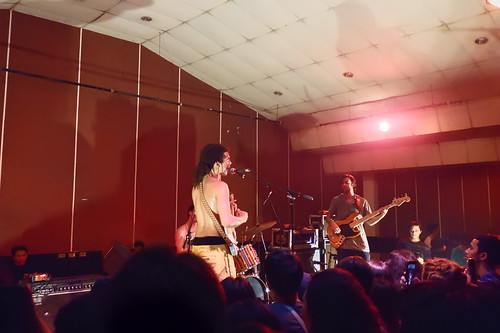 The night was lightless and without AC when the opening act for Cosmo Pyke, Low Pink, a psychedelic pop band began to kick their second song amidst blackout. Arriving at Rossi music for the first time, there’s no way to guess that the 4-story old building full of murals is one of Jakarta’s popular gigs venues with the most anticipated performers by some of the most dedicated fans who are mostly putting on Vans/ Chuck Taylor kicks and tucking in their cute bands/ movies T-shirts in their long cotton pants. When the audience are squeezing, the hall could fit up to 500 hundred people and the sound reverbing from the wall was as clear as the sky in the summer. My only concern was the floor that shakes even with regular non-stomping steps. But it didn’t, by all means, stop everyone from dancing their heart out.

Low Pink performed all songs from their debut EP, Phases, and managed to persuade the crowd to get up and move despite the heat and the dark wrapped around the hall. Some kind-hearted audience voluntarily sacrificed their phone battery to torch-light the stage. The result was romantic and suits perfectly with Low Pink’s lo-fi ambience. In between songs, the front man would ask some normal questions such as “who’s playing mobile legend” and bring a more personal song introduction like “being introverted in the society” and “how life stops asking questions only when we die”. The performance reached the climax when “You” was played in extended version. The longer the bass strings are pulled in such uncomplicated anesthetic manner the better the sound gets, it has a similar effect when Coldplay’s Spark is on repeat. 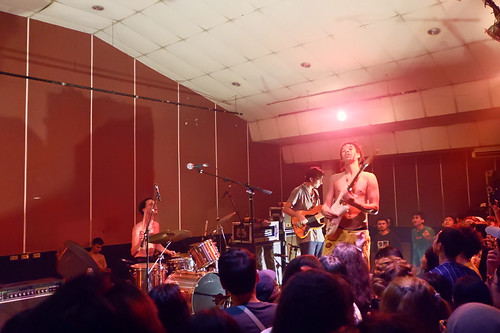 There was about a 20-minute interval before Cosmo came to the stage as the crew were working on the lights and the ACs. The audience were now using their shirts to wipe their sweats and fan anything to get extra wind. None of them was complaining, they waited patiently and chatted with each other. Sometimes the crew would slide in some announcement to the audience that some cars needed to be moved, otherwise the police will stop the show. Other times, a couple of bats flew in random direction on the ceiling and looked as if they’re thrilled to see Cosmo.

The 20 year old London native appeared from the same audience’s entrance, some boys and girls were screaming his name as he walked past and aimed the stage shirtlessly. Cosmo’s first phrase was “It’s so hot!” and we feel him! Wish You Were Gone opened his debut performance in Indonesia. Accompanied with only a drummer and a bassist, we can tell that Cosmo is a well-rounded musician. He sings as though the audience were his long-time mates whom he had a heart-to-heart conversation with in his backyard. Pouring his energy to the crowd, Cosmo shifted from one song to the next almost without a significant break. These breaks are mostly to wipe his drenched sweat, quench his thirst, or replace one of his guitar strings (can’t really tell the sound difference if he didn’t jokingly sing while requesting “could someone get another guitar please”).

The third song was a cover of an ever beautiful Nakamarra from Melbourne’s owned band, Hiatus Kaiyote. Cosmo adjusted the singing with his vocal colour, this made the cover sounds more interesting. Yet, he was struggling to cope with Nai Palm’s signature difficult riffs in the end of the verse 1, and more obviously in the second one. I’m instantly reminisced by the 2014 Grammy nominated track for Best R&B Performance the first time I heard the intro of Cosmo’s most digitally listened song, Chronic Sunshine. Both Nai and Cosmo have this special way of singing songs with acrobatic riffs in the most effortless fashion. 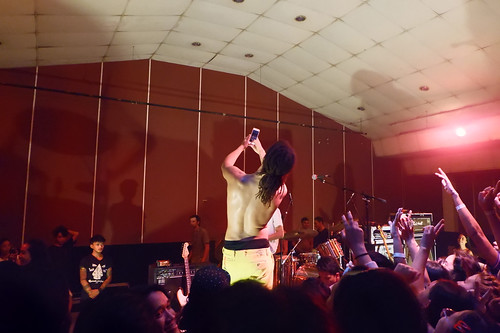 The crowd were carried away in the ode to teenagehood full of mixed feelings and nostalgia, as Great Dane was pulled off. It was then followed by a solo stage act of After School Club, partially because Cosmo was giving his band mates time to drink and a quick break from the heat. Never in my experience attending musical events, would a musician care to do such thing to his/ her band or personally hand water to fans. Cosmo was the first and that adds up to his artistry charm, what a thoughtful young lad.

Cosmo’s ability in fusing a very diversed spectrum of genre like jazz, soul, funk, and a little bit of reggae has made him stands out among many new emerging artists. Not to mention his soulful conversational, full of improvisation singing style that makes his entire song more appealing and enjoyable be it played on your car remembering your high school crush or while watching your friends skateboarding on Saturday afternoon. Truly a hot summer night to remember!

Previous: [INDONESIAN] Lebih Seru 3x Lipat bersama Mocca, Yura, dan The Groove
Next: Join Us on The Most Marvelous Journey Through the Soul , Senses and Mind Together with World –Class Invaders!